The exhibition of the views al Windsor Castle was held in the Red Drawing Room, in the doorway of which, communicating with the Green Drawing Room (most thoughtfully placed at Mr Downey’s disposal) a raised platform and the necessary screen had been erected. Her Majesty was accompanied by Her Royal and Imperial Highness the Duchess of Saxe-Coburg and Gotha, their Royal Highnesses the Duke and Duchess of Connaught and their children, H.R.H. Princess Christian, and H.R.H. Princess Henry of Battemberg with her children. Some forty of fifty of the ladies and gentlemen of the Royal Household were very graciously permitted to be present. The Queen was seated in an armchair with a small table near her, holding her opera-glass. On her Majesty’s right hand was the Duchess of Saxe-Coburg, the Princess Henry of Battemberg being on the left. The Duke of Connaught sat immediately behind the Queen.

Her Majesty was delighted with the animated photographs, and sent to know if it were possible to repeat the views, but upon it being explained that a repetition would necessitate a certain amount of preparation, was pleased to withdraw her request.

Before leaving the Red Drawing Room, her Majesty despatched Lord Edward Pelham Clinton to summon Mr Downey to her presence, and in very gracious terms expressed her great satisfaction with the entertainment provided by him.

After her Majesty’s departure. some of the young Royal children came behind the screen and displayed much curiosity as to the working of the views and the lighting of the same by electric light, and oxy-hydrogen.
(Lady’s Pictorial, 5 December 1896) 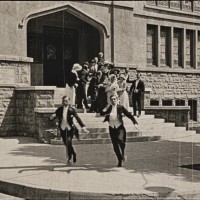