New York February 1912. There seems to be a considerable conflict of opinion among the potent figures of the film industry as to the preference the patrons of Photoplay theater have for comedy, the majority stating that there are not enough laughter-provoking pictures.

To discuss this all’important phase of the Moving Picture, one must naturally turn to the stage for data, in order that such a problem may be fairly solved, and there is nothing to indicate that the playgoers of modern times have been attracted to the playhouse thru comedy offerings as they are to see and hear plays and players, and songs and singers, of a more serious character. Moreover, all the great records achieved in the amusement field indicate a trend of public taste for the dramatic rather than for plays of a farcical order.

“Ben-Hur” has been before the public for twelve years; it has made a million for the producers, and there is almost a total lack of comedy in the portrayal of his epochal play. The most potent plays at the present time are nearly serious: “The Return of Baron de Grimm”; “Mme. X”; “The Littlest Rebel”; “The Music Master”; “The Garden of Allah” and “The Price” have attracted solely for tear-making qualities.

Closer to Moving Picture requirements, a study of vaudeville records shows that the most enduring playlets were such offerings as “The Littlest Girl”; “A Man of Honor”; “A Romance of the Underworld”; “Frederic Lemaître” (in which Henry Miller enthralled vaudeville audiences), and only a few days ago Blanche Walsh held an audience spellbound in a one-act play that had not even a smile in it.

“The Woman,” a Belasco success, draws large audiences without a star, because of the one compelling serious scene. “A Fool There Was” is considered the best “repeater” of modern plays, while Mrs. Leslie Carter has once more held her enormous clientele steadfast with “Two Women,” a play without a single comedy line.

Shakespeare’s tragedies always draw; his comedies are rarely given.

Comic opera has always spelled bankruptcy for the managers who would tempt fate with them, while grand opera al the Metropolitan Opera House draws an average of $70,000 a week, at $6 a chair.

No comic song ever had the vogue of such plaintive ballads as “Tha Last Rose of Summer,” “Home, Sweet Home” and “After the Ball,” all tear-compelling.

Even pantomime had its greatest vogue  with “Un Enfant Prodigue,” a veritable tragic poem without words.

No one will deny that the vogue of the silent drama is what it is, greatly, because such worthy film producers as the Vitagraph, Kalem, Biograph, Edison and others have realized that to  cater to the patronage most desired, they must emulate the methods of the highest grade  od producers of the stage, and they also are aware of the fact that the technique and philosophy of the silent drama is such that they are enabled to score even greater triumphs than the Frohmans and the Klaw and Erlangers, for the stage has its limitations, whereas the Motion Picture play is greatly enhanced by the verity and realism of nature’s own vast resources! 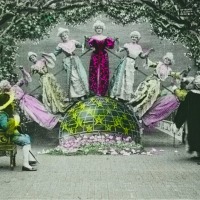