MOVING PICTURES in Rome—what a contrast! Hoary ruins and ragtime, the Coliseum and the Biograph! But, most appropriately, the theater was adorned with tall marble columns and a great flight of stone steps that suggested trailing togas and sandaled feet. Such a theater the ancient Roman might have entered on his way to the Baths of Titus, or as he rattled home in his chariot from a hard day’s work in the Senate House. Indeed, it seemed so much like going to the Temple of Minerva to see Moving Pictures, or expecting vaudeville in the catacombs, that we hesitated before entering. Perhaps this was just another “sight,”  and we were distinctly weary of sight-seeing and a bit homesick; but, no—there were the red and yellow posters of cowboy heroes on bucking broncos, and lovely Indian maidens, looking as familiar here in this hot, sleepy Roman square as they do on Fourteenth Street, in spite of the strange words in the voweled Italian tongue above them. A cowboy by any other name would be as thrilling! So in we went. Indoors, the classic illusion vanished. We were shown to comfortable leather chairs by a dark, smiling usher. The programs were printed in Italian, French and English, but the explanations of the pictures were all startlingly foreign. The somewhat limited Italian vocabulary that we had collected so far being “quanta costa” and “gratia,” we had to depend entirely upon the pictures themselves for the story, and I had never realized before how perfectly pantomime can supply the lack of words. The films were all of American make and American subject matter, picturing a sky-scraper in the making on Broadway, a Kentucky feud and a Western round-up.

But it was the audience that interested us most. There were Italian ladies in low-necked velvet gowns and diamond-bright hands. The men with them bowed them into their seats with faultless politeness—and sat beside them during the entire performance with their hats on! Dingy Street laborers with red neck-kerchiefs rubbed elbows with gentlernen in correct evening dress. And such a responsive audience! They sighed at the pathetic parting of Cowboy Jim and his white-haired mother, laughed when the fat policeman kist Mary Jane and received a frying pan on his head, and hissed threateningly when the villain in top-boots tied the sheriff’s daughter to a log in the sawmill. The pianist was an artist—all Italians are artists in some way—and his music shaded off from gay to grave to the movement of the pictures, more sympathetically than I have ever heard it done in America.

From Rome on, we watched eagerly for the Motion Pictures and never failed to find them, tho not in such quantities as in America. In Florence the principal picture theater was on one of the level, sunny squares, where the pigeons tumble musically about the crumbling stucco of the Monastery of Savonarola.

In Venice we were rowed to the Pathé Frères in a gondola across the Grand Canal.

The Apollo Theater in Lucerne is on a back Street beyond the big arcade and the brilliantly colored postcard booths. Here the seats are divided in Continental fashion into first, second, and third class, with a varying scale of prices. A small boy with a dark-lantern guided us to our seats by throwing a circle of light on the floor. A chime of bells tinkled when the pictures were changed, but there was no other music. It was an exceedingly artistic performance.

The English Motion Picture shows are characteristic. Since no true British man, woman or child can enjoy him or herself thoroly without a cheering cup of that national necessity, tea, the Motion Picture theaters bear placards over the door, “Afternoon tea served free during the performance from three to five.” It is a pleasant sight to see the round-faced ushers distributing trays of this steaming liquid, while hair-breadth escapes, hold-ups and frenzied lovemaking go on unnoticed upon the screen. In war, in peace, in love the Englishman must have his tea. It is fortunate for the pocketbooks of American owners of Moving Picture shows that the Boston tea-party lessened our inherited thirst, for it must be a large added expense to furnish unlimited cups of even very weak tea every afternoon.

When we arrived in London the British enthusiasm over their recent king-making was still echoing in the Pageant of Empire at the Crystal Palace, and in the Kinemacolorgraph
—the Motion Pictures of the coronation colored to life by a new process. We had not been a part of that frenzied horde of curious tourists that flocked to England in June, but our second-hand peep at the coronation, on the screen, gave us probably a better—certainly a cooler—idea of the royal “show.” Taken off their guard by the malicious camera, the dukes and lords appeared in delightfully unconventional postures, and their heavy velvet robes looked realistic in color and warmth.

European audiences go to the Moving Picture shows to see the pictures, not to use them as an excuse for conversation. No whispered receipts for gingerbread or lemon pudding interrupt the dark grandeur of the Milan pictures of Dante’s Inferno; no confìdences about Harry or Charlie mingle with The Indian’s Sacrifice. They give the pictures the same respectful attention that they would a regular theatrical performance, and the result lifts the audience to the artistic level of the pictures themselves. “American papers please copy !” 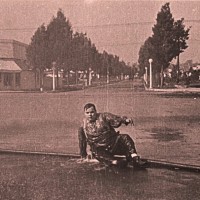 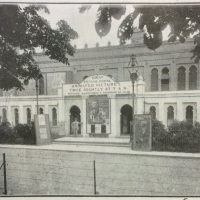 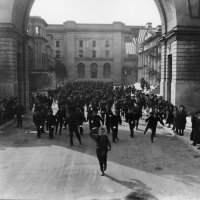 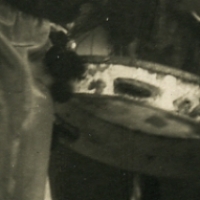